We took Tucker to Red Top Mountain over the weekend.  This state park is only about 25 minutes from our house and offers several wooded trails with access to Lake Allatoona.  It is fast becoming one of Tucker’s favorite romping grounds.

For this outing we chose the White Tail trail, which leads to a portion of shoreline that is the perfect place for a refreshing game of stick fetching. 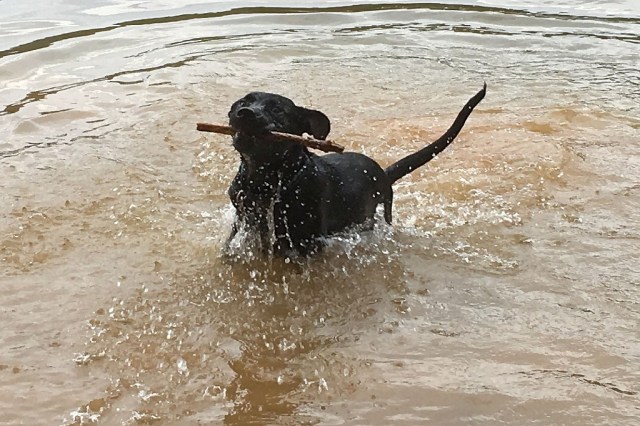 I’m not sure why, but a rather crazed expression tends to accompany this game.

Every once in awhile Tucker would pause to catch his breath (puppies do tire easily!) and then go right back to the romping.

When the fetching was finished, we continued on until the trail ended at a beautiful collection of boulders that overlook the lake.  Mr. T was delighted to show off his new-found rock climbing skills.  I guess we can now call him a boulder climbing beast! 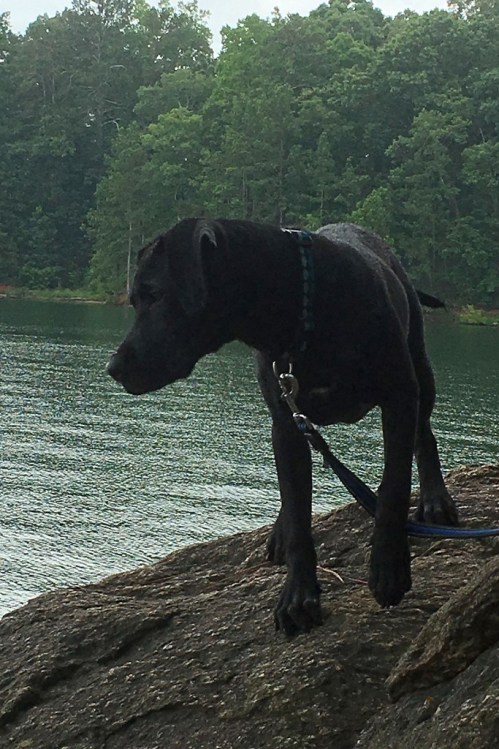 One of the benefits of having a fifty pound puppy is that hubby and I (I guess you can call him a boulder climbing beast too!)  are getting a good bit of exercise.

Wife, mother, daughter, and friend. One who dabbles in writing, thinks in rhyme, and is utterly unable to escape the allure of alliteration:) Amateur nature photographer. A backyard bird watcher, a hiker of non-strenuous trails to waterfalls, and a fan of Atlanta sports teams. Driver of an orange Jeep Renegade who goes by the name of Earl. One who is nourished by silence, solitude, and a good cup of coffee. A lover of God’s Word and the riches that are hidden there. An extremely ordinary jar of clay who longs to see and be satisfied by the glory of God, and to somehow display that in my everyday life.
View all posts by kathydoremus →
This entry was posted in Beyond the Backyard and tagged georgia trails, hiking, Lake Allatoona, photography, puppies, Red Top Mountain, retrievers, state parks. Bookmark the permalink.