Who Gets The Glare?

…but before he could really start enjoying his meal, he turned around and gave an open-beaked glare to a feathered foe that he clearly didn’t want around.

It wasn’t the Blue Jay who was the target of his wrath. This guy is a regular who routinely stops in in for his usual supply of peanuts. 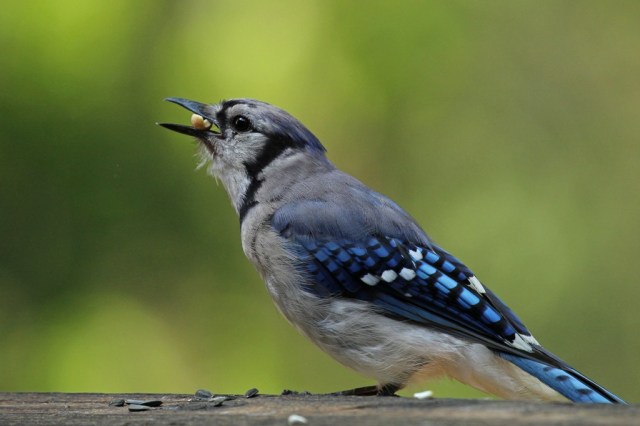 And it wasn’t the Brown Thrasher, who is looking less than stellar as he undergoes his summer molt, but who also popped in for a Planters or two.

The recipient of his angry glare was this gleaming Grackle, who despite looking like he just stepped out of a poem by Poe, is really more skittish than scary. 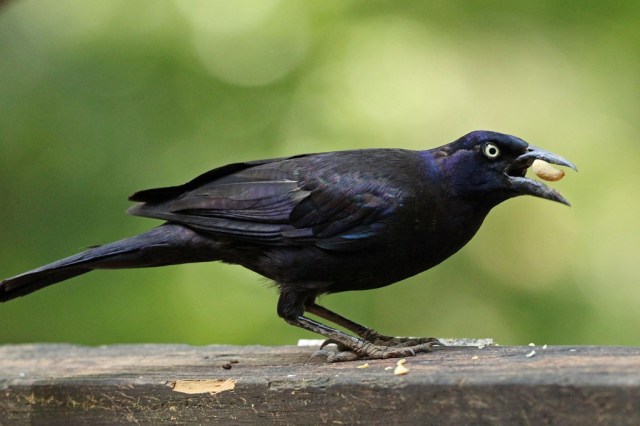 Once the Red-bellied realized that, like the others, the Grackle had his eye on a nutty snack and not the Bark Butter, he relaxed and a tentative truce was called.

Never a dull moment at the backyard buffet!

Wife, mother, daughter, and friend. One who dabbles in writing, thinks in rhyme, and is utterly unable to escape the allure of alliteration:) Amateur nature photographer. A backyard bird watcher, a hiker of non-strenuous trails to waterfalls, and a fan of Atlanta sports teams. Driver of an orange Jeep Renegade who goes by the name of Earl. One who is nourished by silence, solitude, and a good cup of coffee. A lover of God’s Word and the riches that are hidden there. An extremely ordinary jar of clay who longs to see and be satisfied by the glory of God, and to somehow display that in my everyday life.
View all posts by kathydoremus →
This entry was posted in Backyard Birds and tagged birds, georgia birds, Grackle, hobbies, photography, woodpecker, writing. Bookmark the permalink.

14 Responses to Who Gets The Glare?