This morning I am heading over to Foxtale Book Shoppe  (think “Cheers” with books instead of beer) to sign up for an eight week writing class.  I take these classes a couple times a year, mostly because I love being around the quirky, cool, creative folks that tend to participate.  Although I primarily share the first adjective with my fellow writers, being in their presence stretches me out of my comfort zone and spurs me on to greater creativity.

In preparation for the upcoming class, I pulled out my composition book (secretly hoping it was full so I could buy a new one – I am addicted to office supply stores!) and saw a silly little ditty that I wrote in the previous class.  The assignment had been to write a paragraph or so using the following words: jaunty, jauntily, bird, himself, and tread.  Here (complete with illustrations) is what flowed from my pen. 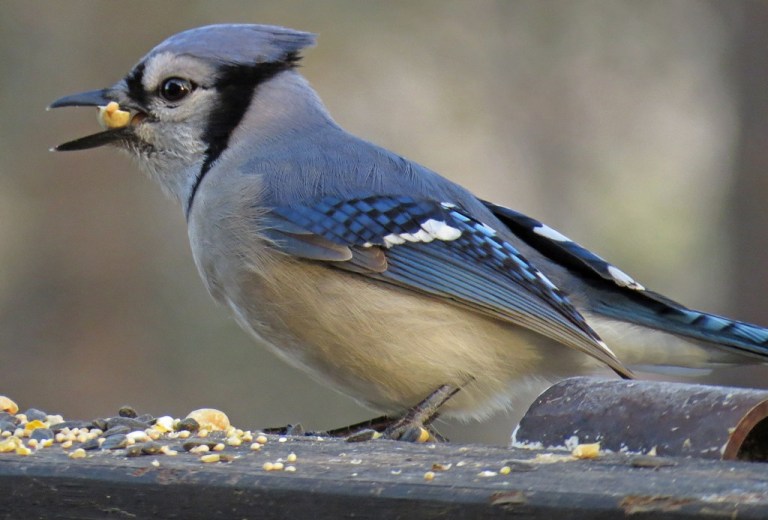 The Blue Jay with his jaunty strut
tread up and down the rail.
He flashed his brilliant blueish crown
and fanned his fancy tail.

He cocked his head and looked about
then opened wide his beak,
and greedily he gorged himself
on corn and nuts and seed.

He ate and ate, then ate some more,
until no food remained.
Then jauntily he stretched his wings
and tried to fly away.

But this greedy bird had grown too fat
so he squatted down and squawked.
And as he lamented his mammoth meal
he became a meal for a hawk!

So the moral of this story is:
Take care where you jauntily tread.
Don’t feed your face ’til you’re full and fat
or you just might end up dead.

By the way, this poem is only slightly far-fetched.  Blue Jays have an expandable throat pouch, and I have seen one pack away thirteen shelled peanuts in one sitting!

11 thoughts on “The Jaunty Jay”