Mating season is upon us, and the male Bluebird is doing his darndest to capture the attention and win the affection of his female counterpart.

…and frantically twirling his wings, which must have some sort of flirtatious significance in Bluebird behavior since he does this quite often in her presence.

He has also presented three different housing options to her, which was highly entertaining to watch – think House Hunters: Bluebird Edition.

Wherever he goes, he keeps a close eye on her…

…while she waits and watches his antics, and (in my opinion) gives him cause to believe his affections are returned. I mean, doesn’t that stance look a wee bit seductive? 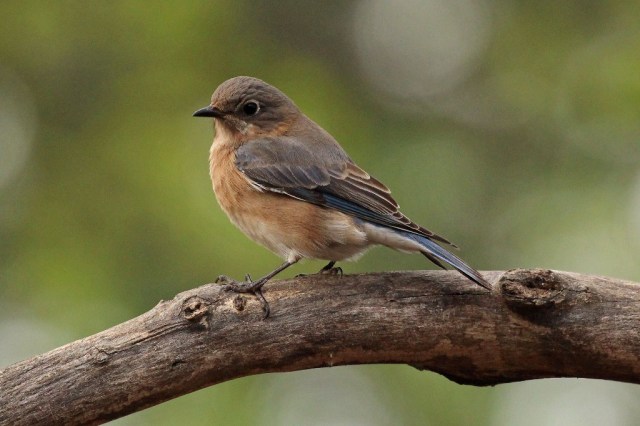 In the end, I think it will be the frequent food offerings he brings her that will seal the deal.

Besides, she’d be a fool to let such a charming fellow fly away.

Attentive, generous, and easy on the eyes…this guy really is the total package!

Wife, mother, daughter, and friend. One who dabbles in writing, thinks in rhyme, and is utterly unable to escape the allure of alliteration:) Amateur nature photographer. A backyard bird watcher, a hiker of non-strenuous trails to waterfalls, and a fan of Atlanta sports teams. Driver of an orange Jeep Renegade who goes by the name of Earl. One who is nourished by silence, solitude, and a good cup of coffee. A lover of God’s Word and the riches that are hidden there. An extremely ordinary jar of clay who longs to see and be satisfied by the glory of God, and to somehow display that in my everyday life.
View all posts by kathydoremus →
This entry was posted in Backyard Birds and tagged beauty, bird photography, bluebirds, georgia birds, hobbies, nature, outdoors, photography, writing. Bookmark the permalink.

8 Responses to Wooing and Pursuing