Posted on September 11, 2016 by kathydoremus

This young Red-headed Woodpecker (who as of yet has no red on his head!) made his first solo appearance to the Bark Butter branch today.

I have been waiting for this handsome guy to get close enough, and linger long enough, for me to get some better photos, so I was pleased when he obliged.

Doesn’t he look like he’s a part of a an old black and white movie where I’ve colorized the scenery around him? 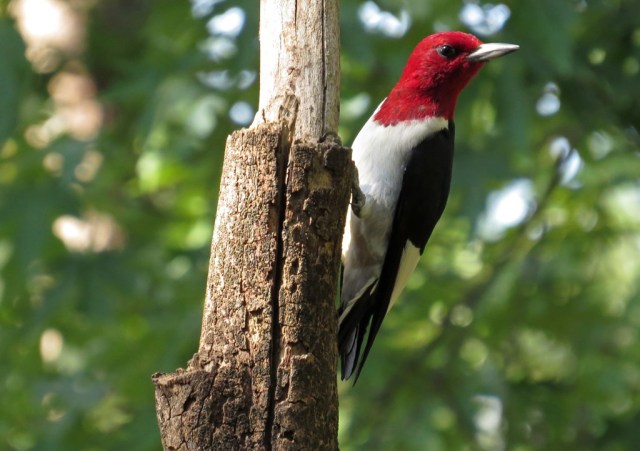 …but for now, I’d say he looks pretty magnificent in monochrome!

Wife, mother, daughter, and friend. One who dabbles in writing, thinks in rhyme, and is utterly unable to escape the allure of alliteration:) Amateur nature photographer. A backyard bird watcher, a hiker of non-strenuous trails to waterfalls, and a fan of Atlanta sports teams. Driver of an orange Jeep Renegade who goes by the name of Earl. One who is nourished by silence, solitude, and a good cup of coffee. A lover of God’s Word and the riches that are hidden there. An extremely ordinary jar of clay who longs to see and be satisfied by the glory of God, and to somehow display that in my everyday life.
View all posts by kathydoremus →
This entry was posted in Backyard Birds and tagged beauty, birds, cameras, Canon, hobbies, nature, photography, red-headed woodpecker. Bookmark the permalink.

13 Responses to Magnificent in Monochrome