…when out  popped this chipper little fellow.  I’m pretty sure we were both a bit startled.

After retreating several rocks away, he gave me a glance and I guess decided that I posed no threat to him. 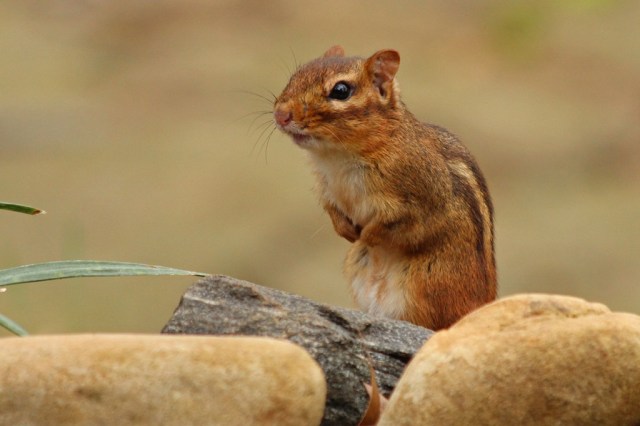 He then proceeded to give himself a thorough grooming.

As he stood giving himself a “cat bath”, he was completely oblivious to the fact that he was in danger of becoming “cat bait.”

Unlike the chipmunk, however, the cat clearly decided that I was undesirable company and opted to explore other hunting grounds.

Meanwhile, this little guy darted into his rock fortress, only to emerge right beside me.

There’s no denying that he’s a cutie!

Wife, mother, daughter, and friend. One who dabbles in writing, thinks in rhyme, and is utterly unable to escape the allure of alliteration:) Amateur nature photographer. A backyard bird watcher, a hiker of non-strenuous trails to waterfalls, and a fan of Atlanta sports teams. Driver of an orange Jeep Renegade who goes by the name of Earl. One who is nourished by silence, solitude, and a good cup of coffee. A lover of God’s Word and the riches that are hidden there. An extremely ordinary jar of clay who longs to see and be satisfied by the glory of God, and to somehow display that in my everyday life.
View all posts by kathydoremus →
This entry was posted in Backyard Birds and tagged birds, chipmunks, creativity, hobbies, nature, outdoor photography, photography, spring, writing. Bookmark the permalink.