I was walking through my kitchen the other day and happened to glance out the window just in time to see several birds swoop in and land in the backyard branches.  Sure enough, a handful of Cedar Waxwings had descended to soak in the sun.

Of course, as soon as I saw them my mind immediately forgot what I was suppose to be doing (I later remembered to feed the dogs their dinner!) and I quickly reached for the camera. After all, this might be the last chance of the winter to take Waxwing pictures. 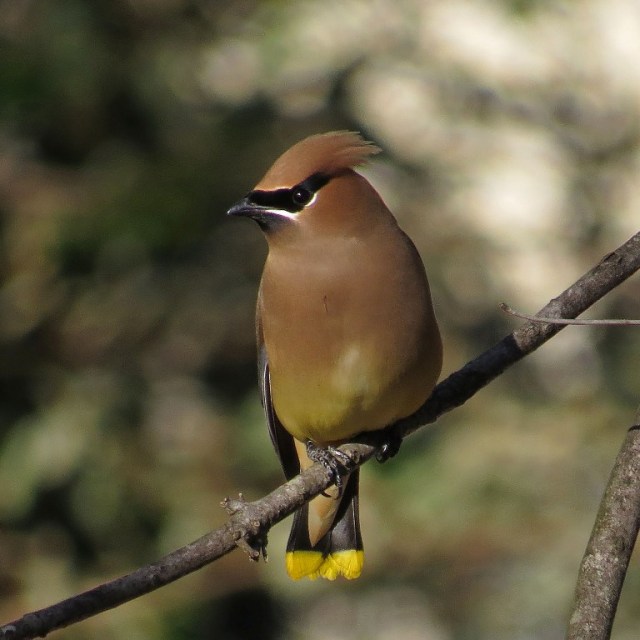 The air was downright chilly, and a couple of them poofed themselves up for added insulation, making them look like fat little feather balls. 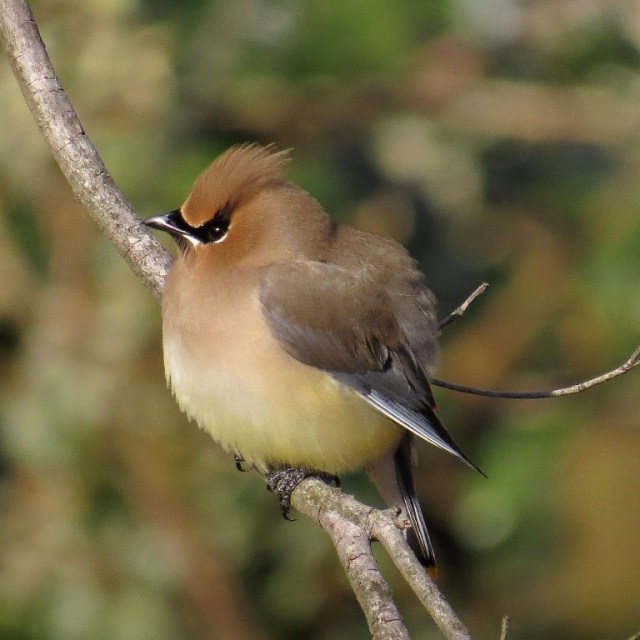 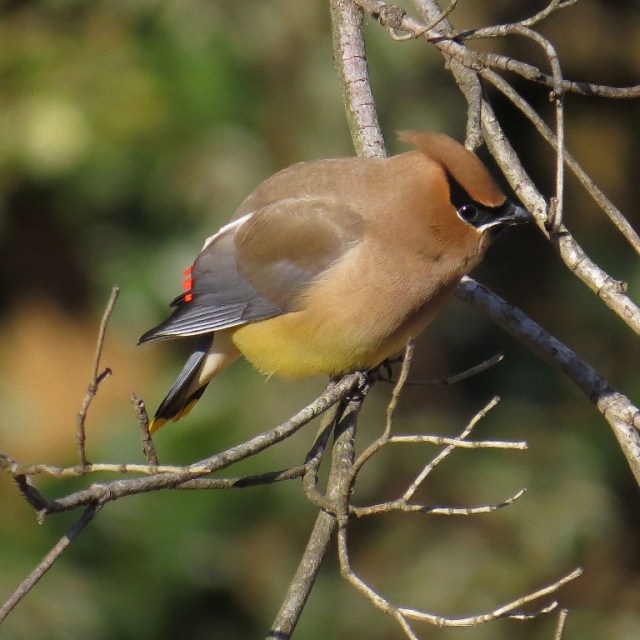 I think one of the reasons I love Waxwings so much, besides their bandit-style beauty, is because they seem to get along with each other so well.  They tend to show up in a large group (which is called an “ear-full” or a “museum”, by the way) and yet I’ve never seen them fussing or fighting with one another.  They share a sweet sense of community. 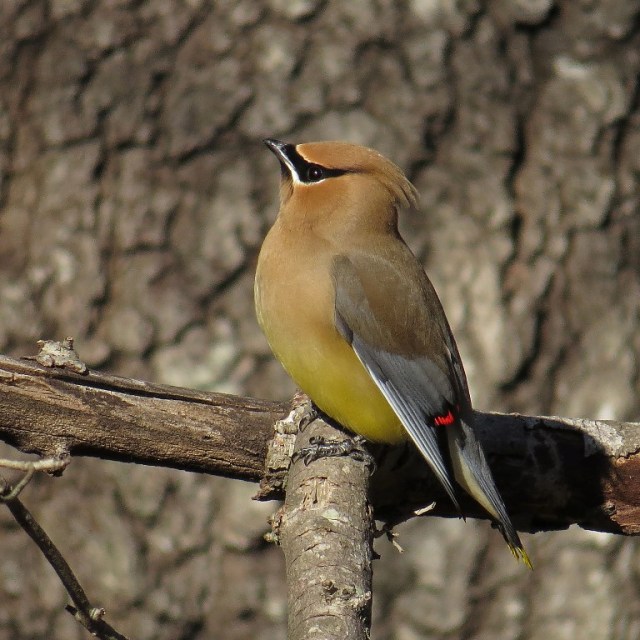 Waxwings are prolific berry eaters and can strip a tree clean before you know it.  On occasion, they have been known for “FWI” (yep – flying while intoxicated!) because they chose to eat fermented berries! 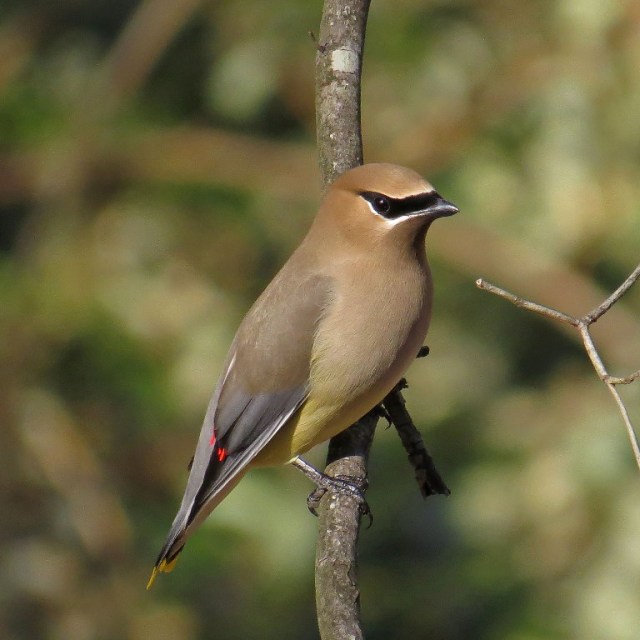 I forgot to mention in my last post that my daughter and I brought home a souvenir from our mother-daughter get away – a jeep covered in Waxwing poop!  We made the mistake of parking under some sort of berry tree on our last stop of the journey and Earl ended up a speckled mess.  We tried to stop at a gas station and clean the windshield, but all the squeegees were frozen!  Ah well…I guess prolific berry eaters would have to also be prolific poopers!

I hope these birds keep showing up as spring rolls around, but just in case they leave with the season, here’s one last picture from winter. 🙂 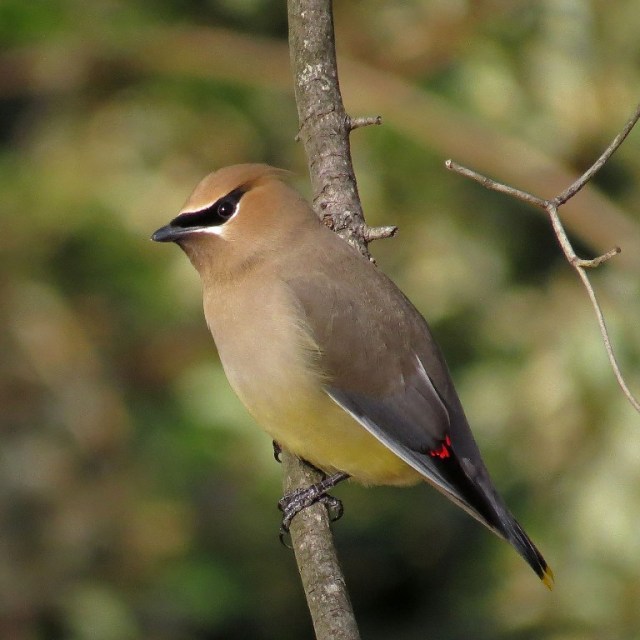 Wife, mother, daughter, and friend. One who dabbles in writing, thinks in rhyme, and is utterly unable to escape the allure of alliteration:) Amateur nature photographer. A backyard bird watcher, a hiker of non-strenuous trails to waterfalls, and a fan of Atlanta sports teams. Driver of an orange Jeep Renegade who goes by the name of Earl. One who is nourished by silence, solitude, and a good cup of coffee. A lover of God’s Word and the riches that are hidden there. An extremely ordinary jar of clay who longs to see and be satisfied by the glory of God, and to somehow display that in my everyday life.
View all posts by kathydoremus →
This entry was posted in Backyard Birds and tagged adventure, backyard birds, bird photography, bird watching, birds, jeep, nature, photography, waxwings, writing. Bookmark the permalink.

19 Responses to Last Waxwings of Winter