The water dishes were frozen solid this morning, all except the heated one on the deck railing.  Normally, the birds would simply flock to the fountain, but alas, it is experiencing technical difficulties and is out of commission until my household hero can take a look at it.  I knew the birds would be searching for fresh water, so being the kind soul that I am (I can only get away with that if you don’t really know me!) I took a pitcher full and poured it on top of the layers of ice.

The birds seemed to know that this water would soon freeze too, because a bit of a drinking frenzy proceeded to take place.

First to arrive were the Cedar Waxwings.  I had a hard time getting clear pictures of them because they were a constant blur of motion and the lighting was still rather dim.  While some drank from the clay dish (I like how they are standing on the ice) another group congregated at the larger birdbath. 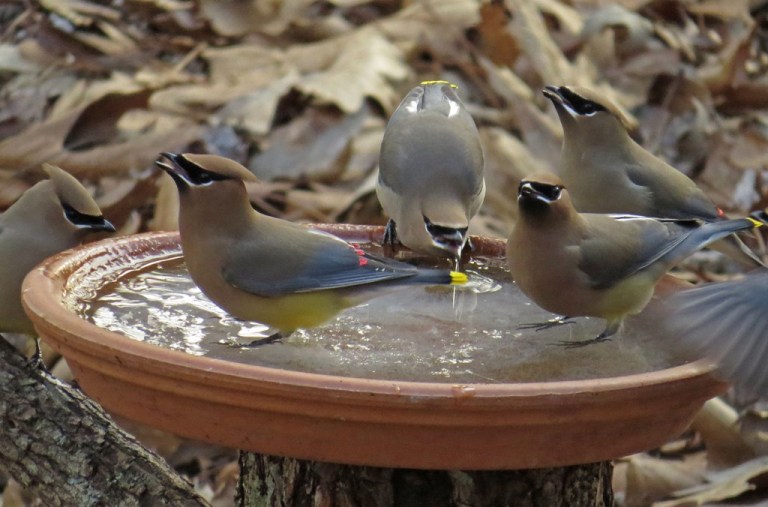 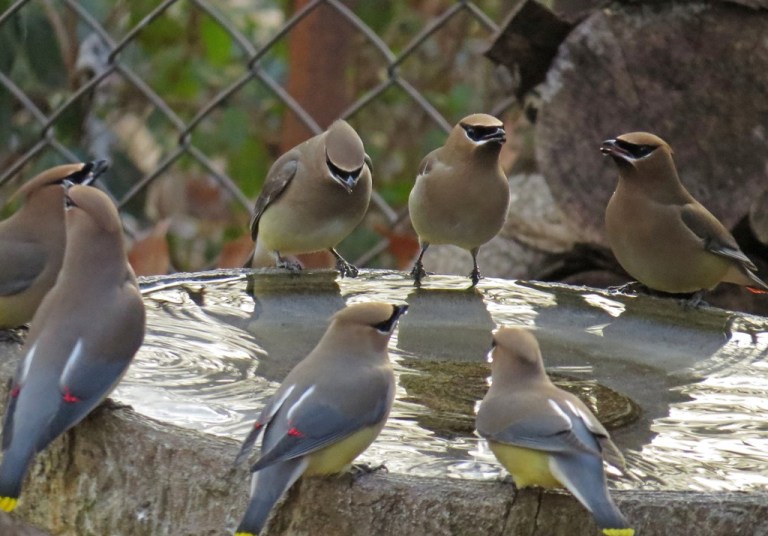 It wasn’t long before the Blue Jays showed up and took over the water dishes. 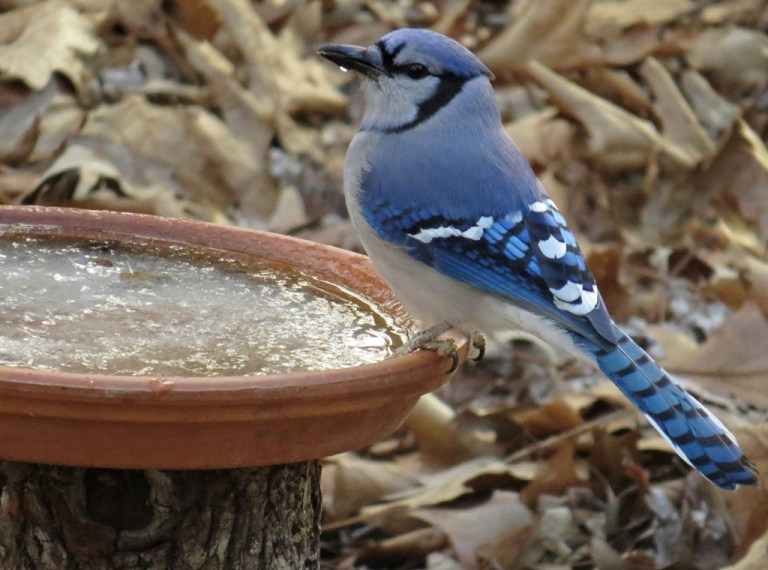 You can tell that the water was freezing quickly.  He had to poke his beak beneath the surface to get a drink. 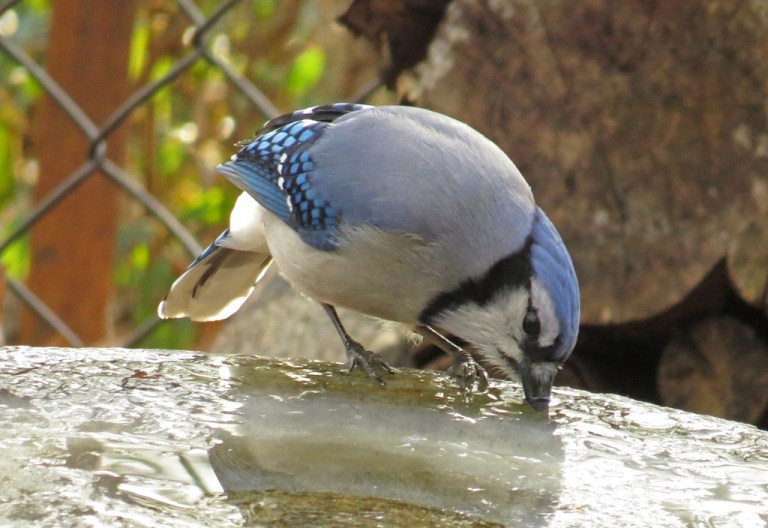 Here are a couple more Blue Jay pictures, simply because I think their markings are nothing short of miraculous. 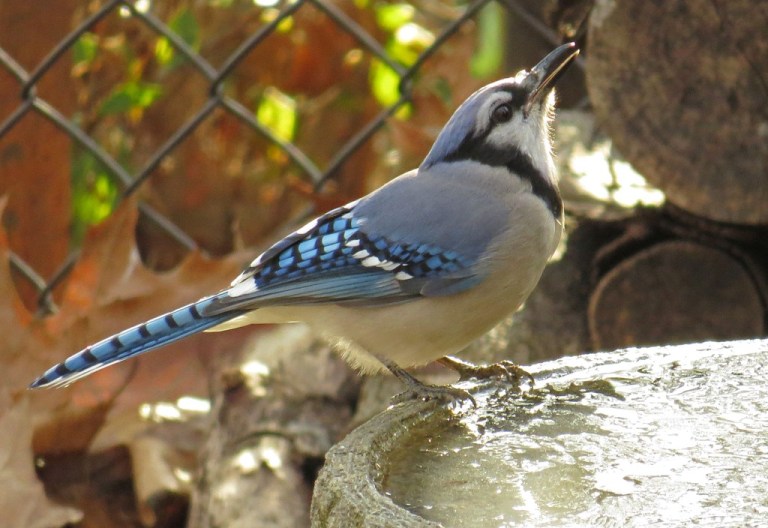 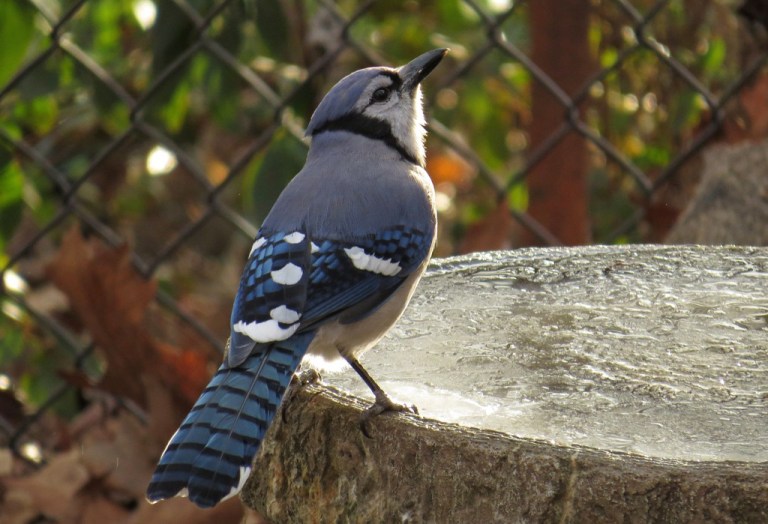 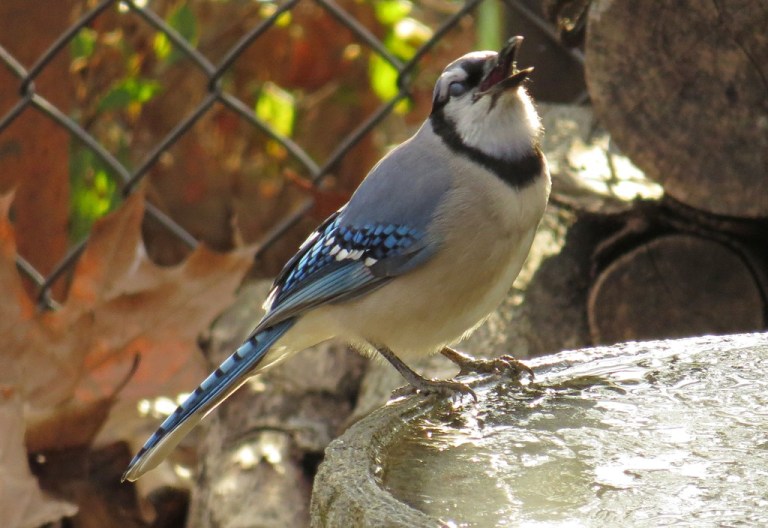 Next came the Cardinals.  The female first… 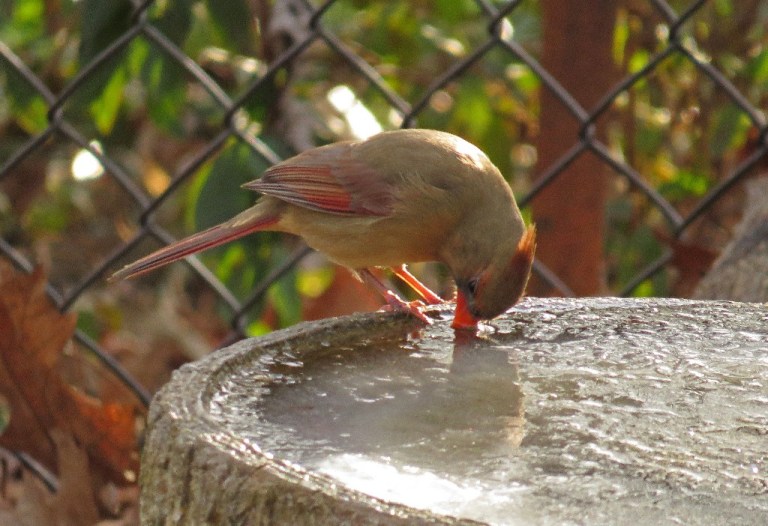 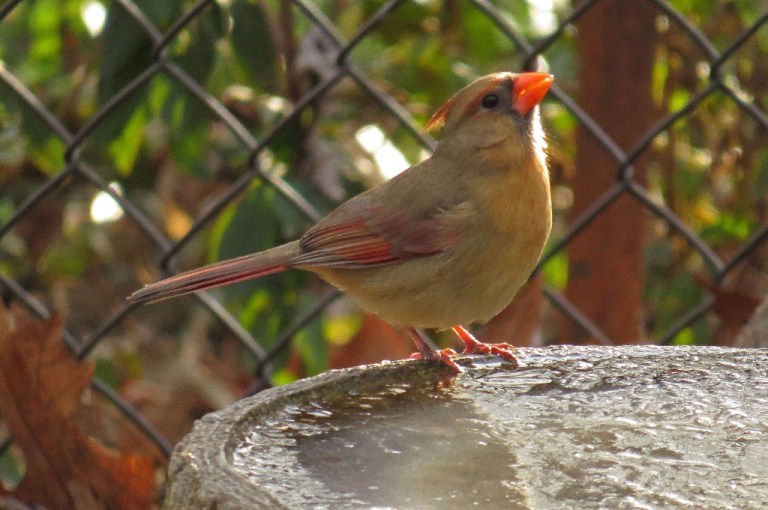 …followed by the male. 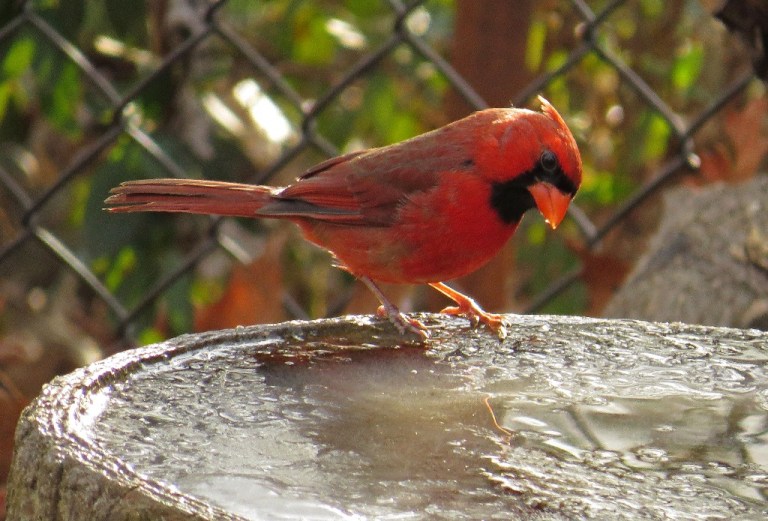 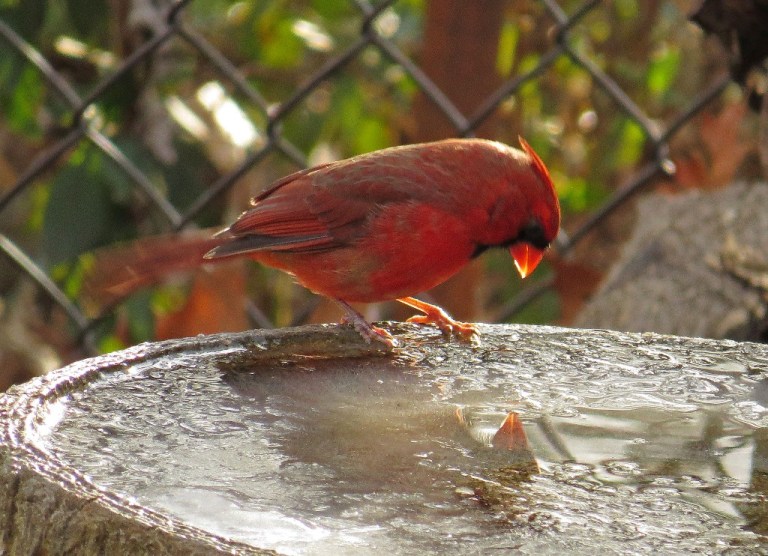 The award for the smartest bird goes to the Pine Warbler, who opted to hang out at the heated water dish to do his drinking. 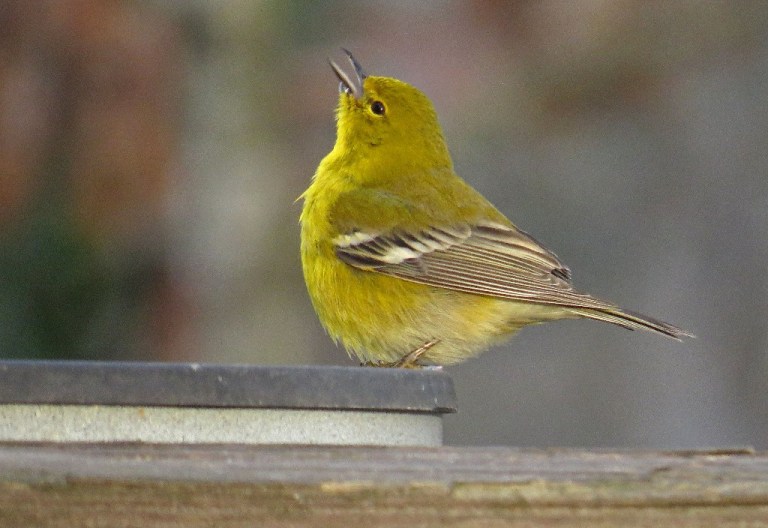 The temperature stayed  chilly for most of the day, so I went out a number of times to break up the ice in the dishes.  During the afternoon hours, as I was about to repeat this task, I saw a couple of Waxwings perched on the deck railing – which is not their usual hang-out spot. 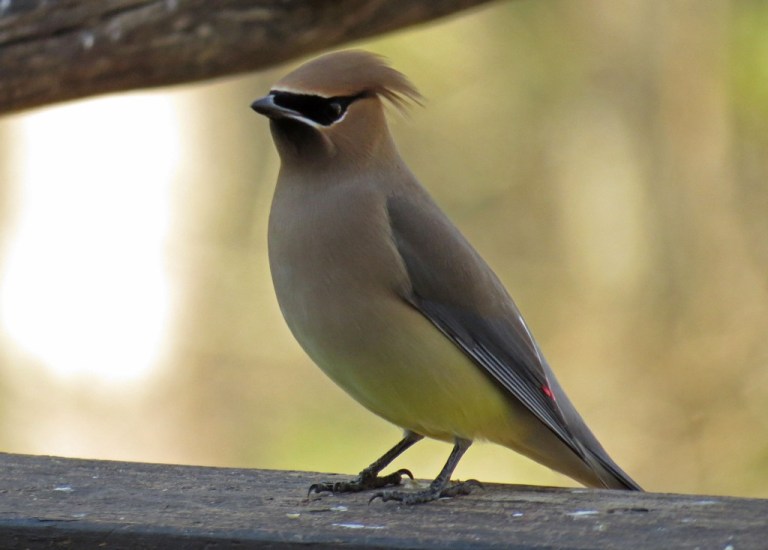 Before long, they were drinking at the heated water dish.  I guess they must have heeded the wisdom of the Warbler! 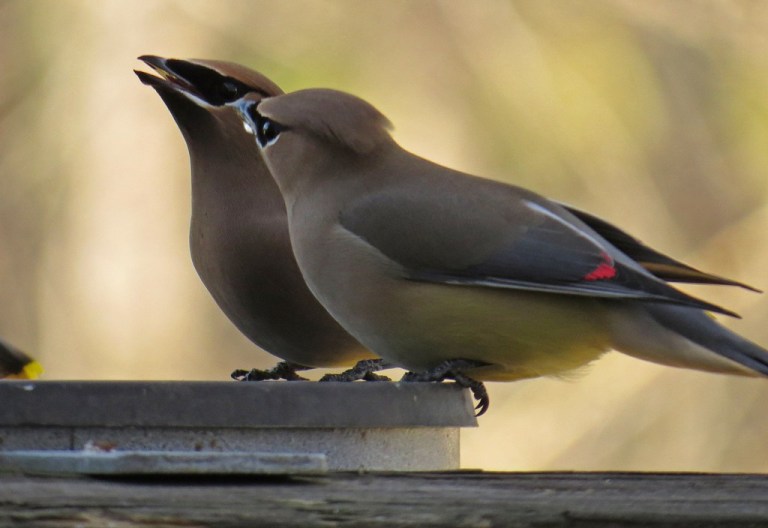 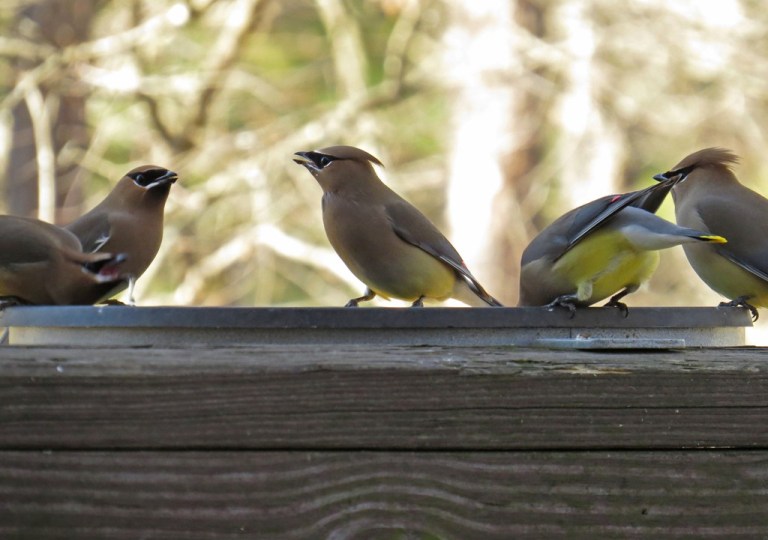 14 thoughts on “The Wisdom Of The Warbler”