When In Rome…Beware Of Mallard Mayhem

After leaving the stables Sunday morning (see yesterday’s post if you want to get caught up) I made my way over to Swan Lake.  As usual, the royal resident was gracefully gliding across the water.

Although the swan has had the starring role in previous posts, the honor this time goes to the male Mallard, who was ferociously flapping his wings to impress his female companion.

The two made a striking pair as they drifted along together.

I noticed that they were doing a lot of mutual head bobbing as they swam. I’m pretty sure this was a form of feathered foreplay because before long the couple had…well… coupled.  I hesitated taking a picture, but to be honest, it was fascinating.  Besides, I knew you’d be fascinated too! It was a brief interlude, but I was still afraid he might drown his poor partner.

Afterwards, the male swam off wearing a rather smug expression.

Now, as if that wasn’t enough excitement for one morning, immediately following the mating, a rival suitor showed up on the scene resulting in some major mayhem!

Here’s how it played out.
First, our dashing drake saw the intruder and rushed back onto the lake, intent on being sole possessor of the lovely female.

Meanwhile, his opponent awaited his arrival.

The two met in the middle of the lake and began an aggressive battle. 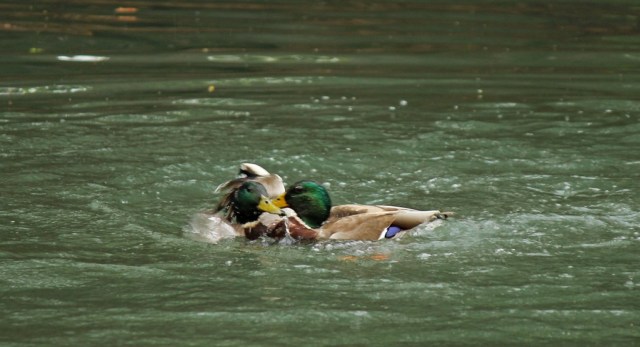 …but then they would turn right back around and start biting and pecking and pulling each other under water.

Let me just say, this second male was not easily deterred from his mission.  Several times, the original pair tried to sail off into the sunset, only to turn around and see a maniac Mallard in hot pursuit.

At one point, I turned to the swan and asked, “Can you believe this madness?”
He simply stared at me and remained silent.
Then I remembered, “Ah, yes, this is a Mute Swan.”

Eventually, some sort of cease fire was called, and the unsuccessful adversary went off to the edge of the lake. I’m not sure whether he was nursing his wounds or plotting his revenge. 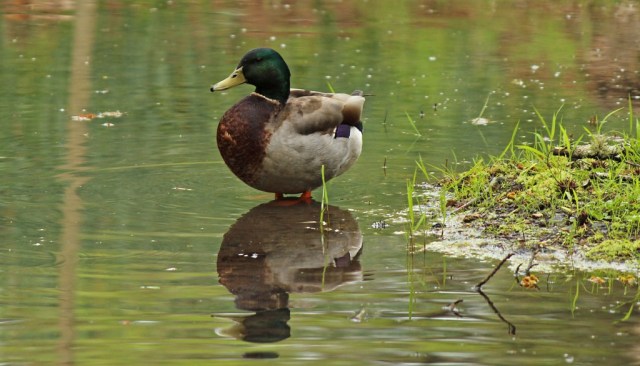 The victor gave one final taunt… 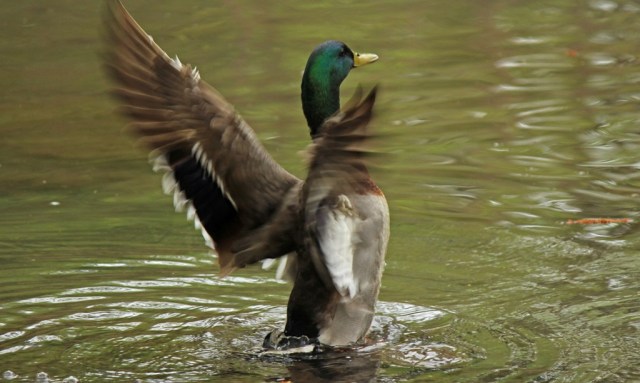 And then swam off with his hard earned prize. 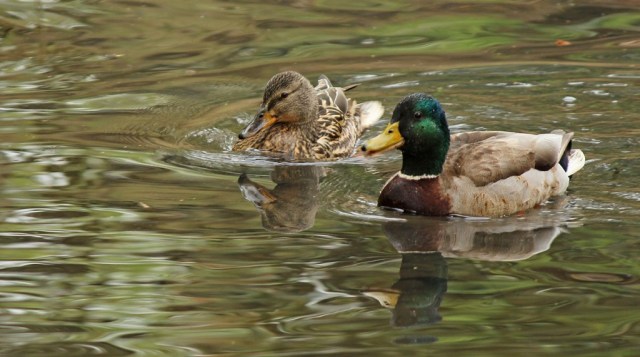 And the swan continued to skim along the water’s surface, a silent witness to the whole escapade.

Wife, mother, daughter, and friend. One who dabbles in writing, thinks in rhyme, and is utterly unable to escape the allure of alliteration:) Amateur nature photographer. A backyard bird watcher, a hiker of non-strenuous trails to waterfalls, and a fan of Atlanta sports teams. Driver of an orange Jeep Renegade who goes by the name of Earl. One who is nourished by silence, solitude, and a good cup of coffee. A lover of God’s Word and the riches that are hidden there. An extremely ordinary jar of clay who longs to see and be satisfied by the glory of God, and to somehow display that in my everyday life.
View all posts by kathydoremus →
This entry was posted in Beyond the Backyard and tagged beauty, berry college, bird photography, inspiration, mallards, natuer, photography, swans, writing. Bookmark the permalink.

11 Responses to When In Rome…Beware Of Mallard Mayhem